Smarts- And I'm Not Talking About The Witty Kind

Because anybody with HALF a brain wouldn't have done the stupid, stupid thing I did two nights ago.

There I was, totally innocent, standing in the kitchen, microwaving dinner (hamburger helper, really healthy, just trust me).

My parents microwave is stationed above their stove, and I usually set whatever thing I am heating and eating right on the stove after it is warmed. However, this particular night, my dad was making Sweet Baby Mark's (long story about barbeque sauce that would probably encroach on some kind of trademark infringement), and Carla was making a grilled cheese and tomato soup, so most of the kitchen was being used.

Carla had finished making her food, and I had taken over the area, so before I set anything on the stove I wanted to make sure it wasn't so hot that it was going to melt the rubbermaid containers that I was cooking in.

Before I continue this story, I want to say that in MY defense, most people that use a stove leave the pan on the hot burner until everything cools down. It's sort of a signal that says, "Hey, I used this part of the stove, so it's probably still hot." At least, I like to think that most people do that. And since my parents have a GLASS top stove, it is only that much harder to figure out if it is still heated up or not.

Anyway, continuing on with my story, (and destroying almost all of the credibility that I ever had), I lowered my hand over the heating element on the right- it was warm, but not HOT- so I deduced that the left side was probably the same, and laid the back of my entire right hand on it.

Because apparently, Carla had JUST finished making her grilled cheese on that burner, and moved her pan to the back of the stove leaving the burner uncovered.

Needless to say, I will never be a professional chef, because even I am pretty sure that no one in America goes for charred fingers with a side of bonehead.

I also found out that it is very hard to count money and type with a bandaged hand. Luckily, I am down to three band aides and a bruised ego, both of which are healing little by little. 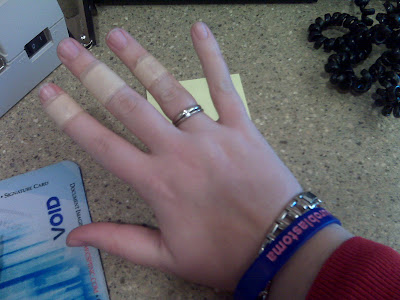 So, if you were wondering why I haven't written anything lately, I plead temporary insanity.

Because only someone who has totally lost their marbles would put their hand on a hot stove.