It's been said that if you plan to change your life, you need someone to motivate you.

Well, last night my husband did just that.

For the third day in a row, I paid attention to my eating habits by starting a "food diary", and began walking. I decided that this was going to be the year that I learn how to run.

Let me start by explaining that I have NEVER been a runner. A biker, yes, runner, notsomuch. First, there is the boobage issue. I have always been, shall we say, a little top heavy, which apparently doesn't work in my favor when trying to coordinate the breathing with the pavement pounding. Also, I am lazy. I know, that shocks you, having two kids and all- when does she find the time to be lazy??

It's an art. Don't even try to replicate it, it takes hours of doing nothing to be as professional as I am.

So, back to my story about my journey to be a runner- I talked my husband into going with me last night. My husband was a cross country runner in high school, and can still just get off the couch and run for 6 miles without killing himself. This has been a big issue for me, as I have always been secretly jealous.

I had no idea what was so fun about running, but as soon as you get out and pop those earbuds in and listen to a little Smashing Pumpkins, you feel like you can take on the world.

That is, until your husband points out that when you run, you shouldn't be able to hear it from half a mile away.

He tries so valiantly to explain how I am wasting so much energy because my foot strikes the ground from heel all the way to toe, and that I should be running on the balls of me feet.

I correct that, but then he is laughing about how my toes are pointing in when I try to do that.

I finally think I have it- until I notice that I can still hear my feet "slapping" the ground, and he is barely making a noise.

I think I pinpointed the problem however- he bounces like he is weightless, and there is a reason Nike doesn't make running shoes for elephants.

Maybe tonight I will wait until he falls asleep, and sneak out with my dignity and attempt some more soundless steps.


Then again, how does an elephant "sneak" anyway? 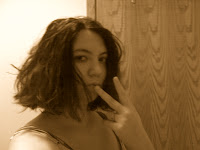