I don't think I have EVER been this organized in my life... In fact, I wish I had been more diligent about it in school!

Charlie has her medicine case. 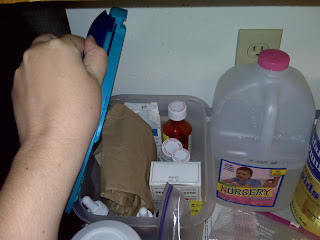 It is a tub with a locking lid that has about six different meds in it, all for different things, all with their own syringes, and each medication with it's own packet of warnings and side effects.

Every time I open it, there is this little ping of responsibilty that sort of goes off in your head like a bell. This is important shit. Not just a "Hey, time to give the baby tylenol for a cold," crap. Its more of a "Holy cheeseballs, I hope I don't screw up any of these dosages and turn her into a drooling imbecile permanently...".

Lisa Keller called last night with some of the best news I have ever received in my life. It has only been topped by my finding out I was pregnant with Charlie. She told me that Charlotte is double MYC negative.

In idiots terms (as I like to refer to it) that means her cancer is highly treatable and she won't have to go through higher dosages of chemo. We have been waiting on those test results for almost two weeks now. She told me to act surprised when the oncologists called with that info. Funny enough, its been almost twenty four hours since Lisa called, and they still haven't tried to contact me.

We also got her blood draw results back:

Neutophil 13 (that is not so good- typically, the average person is at 45-75, 10 is considered really low, and 5 is considered dangerously low, so for right now we are restricting visitors and she won't be leaving the house for fear she could catch something.)

I had a bit of a scare with our in home nurse people- they shipped her at home care supplies the Thursday we got home from the hospital, and when I checked the syringes I was a little thrown off... Her Heparin syringes they sent were at 100 ml per unit, and the ones we were flushing her PICC line with were 10 ml per unit... I called Lisa, and she immediately said NO NO NO, do NOT use those, use the 10 ml ones. Turns out Lisa is skeptical about using the 100 ml syringes because any excess could go into her bloodstream, so Chartwell (in home nurse people) had to be written up for sending us the wrong syringes.

Can you believe we have had to deal with that already?? That should clue you in a little as to how much my brain has changed. We went from normal baby to cancer baby in less than a week. You would be surprised how fast you adapt.

You would also be surprised at how tough you are.

I am once again reminded of one of my favorite chinese proverb type stories, and I would like to share it with you and then give you a take on our own...


There is a Chinese story of a farmer who used an old horse to till his fields. One day, the horse escaped into the hills and when the farmer's neighbors sympathized with the old man over his bad luck, the farmer replied, "Bad luck? Good luck? Who knows?" A week later, the horse returned with a herd of horses from the hills and this time the neighbors congratulated the farmer on his good luck. His reply was, "Good luck? Bad luck? Who knows?"

Then, when the farmer's son was attempting to tame one of the wild horses, he fell off its back and broke his leg. Everyone thought this very bad luck. Not the farmer, whose only reaction was, "Bad luck? Good luck? Who knows?"

Some weeks later, the army marched into the village and conscripted every able-bodied youth they found there. When they saw the farmer's son with his broken leg, they let him off. Now was that good luck or bad luck?


Here is our story:

I found out I was pregnant at a time when Kevin and I weren't prepared for a baby. Good luck, bad luck? Who knows.

She was born while we were covered by health insurance right before Kevin lost his job. Good luck, bad luck? Who knows.

When Kevin lost his job, we managed to get the girls covered by state insurance, and got both of them on Physicians Plus HMO- the Tuesday BEFORE Charlie was diagnosed with cancer. Good luck, bad luck? Who knows.

The health insurance Charlie has covers everything 100%. Good luck, bad luck? Who knows.

She is considered a paraplegic right now because of the loss of function in her legs. Good luck, bad luck, who knows?

Because of her paraplegia, we MIGHT qualify for social security...

Do you kind of see what I am talking about?? Even though bad things have been happening to us, it would seem that karma sends a good thing our way as well.

Right now we might be blind as to why this happened to OUR baby, but who knows what God could have in store for her down the road?

Maybe she will be able to contribute things to this study we signed up for that will help other babies like her.

Patrick okayed me off for this week yet, and I am still struggling with this internal war in my head. I felt so guilty going back to work after she was born, and then the cancer kind of validated my guilt, so I am struggling once again with getting back into the routine.

However, I then kick myself for NOT wanting to go back, essentially turning myself into a hypocrite when I spouted all that hoopla about wanting our life to go back to as normal as possible.

How do you move on from this mindset? Obvioulsy I didn't cause her sickness, I am smart enough to realize that, but you can't stop the guilt in your heart as a parent when you see your child sick with something you care helpless to combat.

Its like walking into a gunfight you knew was going to happen, but you still brought a knife.

This baby who has only been on this planet for 5 months has already brought us so much joy beyond belief, and at the same time an insurmountable grief, that you are experiencing feelings you have only heard authors attempt to describe in fictional novels.

While as human, we are aware that we thrive on the fortune OR misfortune of other human beings, when it happens at your own door you are ALWAYS ill prepared.

It is a slap in the face to know that when you think this sort of thing only happens to "other people", that essentially YOU ARE someone else to someone else.

My daughter is making me a different person. A better person, I like to think. A person that can be sympathetic to the type of pain other people experience as a parent. 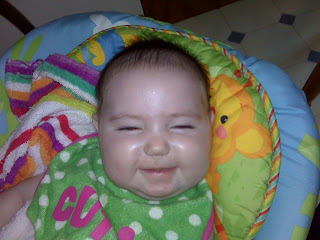