This is our last night in the hospital.

It feels like we have been here for an eternity, but I am suddenly overwhelmed by the thought of leaving.

For the past week, we have had a nurse to call to cater to our every need- they have changed her, fed her, flushed her PICC line, reassured us every time we had a spazz moment...you name it. And suddenly we won't have that anymore. Its uber intimidating.

Today was a big day for us- Charlie had something called an MIBG scan. To break it down for you, she was injected with a radioactive isotope that makes her circulatory system and the Neuroblastoma cancer cells light up like a Christmas tree. This test (which is part of the nuclear medicine area in the main hospital) will tell us exactly where in her body the cancer has metasticized. We already know its on her liver, and hopefully we will find out that that's the only other place it is. We should hear by rounds tomorrow. 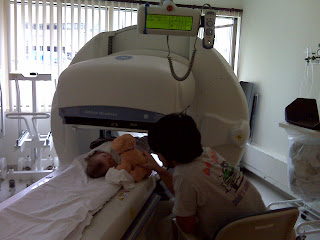 This is a picture of dad holding Charlie's puppy, Mister Floppy Ears (as named by nurse Amy today) while she is pappoosed in the MIBG machine.

Kevin's parents are coming by for rounds, and to get a run down of everything that is going to be involved in her coming home. I really hope it isn't as overwhelming for them as it was for us. To think that she can't do normal baby stuff... she can't be close to her other cousins for fear she could catch something. She can't go in a swimming pool. She can't be exposed to the direct sun. She can't do this- she can't do that. There is so much involved I don't know how we will keep track of it all.

Aimee came up to hold vigil with us tonight, and to tell me how far her prayer chain is reaching for Charlotte. She has been so wonderful to us- she brought me up an emergency kit that contained a People magazine, a Cosmo, and a sketch pad. Celebrities are always a good distraction to real life. 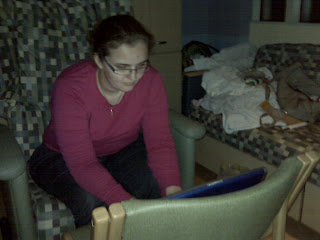 Right before she headed out, Nurse Kali (secretly one of our favorite nurses) came in to give us the run down on Chester. 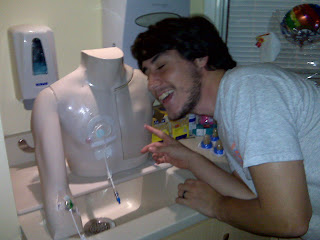 This is my husband "man" handling the manequin... 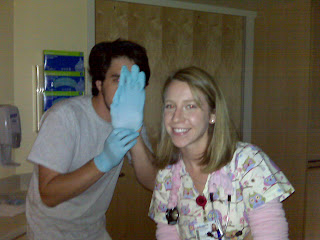 This is Nurse Kali and Kev getting geared up to flush a fake PICC line.

After we had a practice run, I gave it a shot on Charlie's line. It went off without a hitch. I changed the whole safe site! (And TOTALLY just had to ask my husband what it was called again...hahaha!)

It really isn't as intimidating as it looks I guess. I was really scared to do it because there are so many things that can go wrong, but when you are actually attemping it, you don't think about what can go wrong, just about what you are supposed to be doing at the moment. Which is a good thing.

Charlie's next chemo cycle is set for July 20th, at which point she will get a special line called a Hycman. I'm actually not positive if thats the way it's spelled, but I'm not going to worry about it right now since she doesn't have one.

We are in high spirits tonight, and hopefully she won't need a blood transfusion before we leave tomorrow. Her hemoglobin (red cell count) was at 8.8 this morning, and because of the special Neuroblastoma study we signed her up for (where she will hopefully only need four cycles of chemo instead of 8-9) she has to stay at a hemo of 8 or higher. So if she has dropped by the morning, we might need to get her a transfusion before we leave.

No big deal though- I was assured that we would still be checking out, maybe just a few hours later.

I look forward to updating you tomorrow night when we are home and comfortable.

Hopefully this last picture can bring you as much comfort and joy as it did to me today. 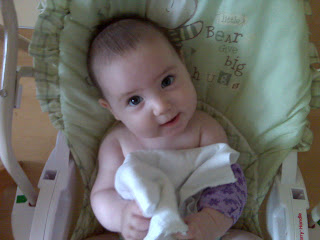 And you can thank Kevin for it. He has a real talent for making the lady smile.