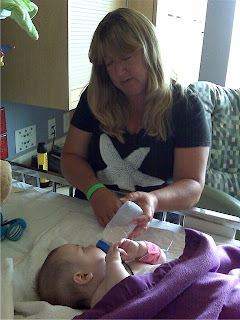 Charlie was feeling a LOT better this morning, and when we made it to rounds I asked for her leads to be taken off. And they were. And I was rewarded with a smiley baby who got to sit in a swing most of the day. Which is her favorite thing ever.

And honestly, a smile from her was like HEAVEN compared to last night, which I was starting to think would never end. It ended up being that her Zofran (for nausea) was discontinued. I'm not exactly sure why, but I wasn't happy when I found out. We had a pretty miserable baby until she finally crashed from exhaustion at two in the morning. And I would like my faithful readers to know that the comment I made about Kevin's parents was half made out of frustration and pure tiredness. You should know that I love them very much, and that this has been an extremely tough time for everyone that has been involved.

So a woman named Sandy stopped by today, and she is in charge of the parent meeting that takes place every Sunday. She wanted to tell us about a family who had come to the hospital today who was in a similar situation as us, and was here for their last round of chemotherapy. I was very interested to meet them, and she told us she would talk to them. She then left, and I didn't hear from her for the rest of the afternoon. Just as I was starting to think that maybe this family didn't want to speak to us, there was a knock on our door. Kevin, being the funny guy that he is, knocked back thinking it was one of our nurses. Of course it ended up being a young lady named Lauren, who wanted to tell us about her son named Lance.

It ended up being a really humbling experience.

Lance is a nine month old chubby happy boy, who has (drumroll please) a neuroblastoma. In his chest. On the left side. That invaded his spinal cord. Starting to sound familiar? The more she talked, the more we related. She is twenty two years old, but she sounds ancient when she talks about her sons cancer. Charlotte and Lance were diagnosed about the same age, and they lay in the same position, which Lauren and I both dubbed the "frog pose". However, unlike Charlotte, Lance was not diagnosed right away. He was a very sick little boy for the two weeks it took to get a definitive diagnosis. They had told Lauren that he had pneumonia, due to the tumor showing up as white space in his lung. He got to the point that he was on a ventillator, and even had a trach for a while. 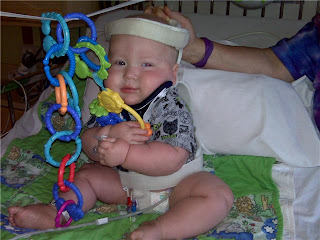 You would not even know he is the same baby who almost died six months ago.

I cannot wait to see Charlotte as happy as he is.

Bekah also made a friend here named Clare. She is a vibrant six year old with a cute bald head and tiny glasses who smiles shyly every time I see her.

It has been so fascinating to me that some of the sickest kids I have met seem the fullest of life.

Kevin and I have plans in the works for bracelets to benefit Charlie. More info on that later.

Overall I would call today a good day on the rollercoaster ride that is cancer.

I'm not going to say that my mood is going to stay this way, but its days like this that make me realize that yes, maybe we CAN get through this...