The Bare Breast of It

I need to openly admit a deep dark secret of mine:

Ever since Kevin and I got married, I have been subtly trying to upstage my mother in law. Before I go any further, I would like to assure my readers that I love this woman to death like she is my own mother. It's definitely NOT a personal attack; however, I think it is something that every daughter in law thinks about... Picture Everybody Loves Raymond. Sometimes I feel like everything she does is better than me, but she has been doing it longer than I have...

We house sat for them over the weekend, and during that time grilled out every day. I bought some chicken breasts and opened the spice cupboard and there were four spices staring at me. Pepper, salt, chicken buillion (what the hell??), oregano, and a sea salt grinder.

I made my first homemade lasagna two weeks ago (it was awesome), and when I knew they would be coming home last night made a pan of brownies. And not just any brownies- double fudge with chocolate pieces baked in and topped with rich fudge frosting.

Kevin and his dad both had two pieces and kept telling me how good they were. And I have to admit I was glowing a little- revelling in my one-upness...

Until she made chicken tettrazinni two days later, and totally blew me out of the water yet again.

I'm sorry if you were expecting me to say I had a secret lover or something more glamorous along those lines, but I still feel a bit guilty about this confession anyway.

We had to put Charlotte on formula this weekend as well- I can't keep up anymore. Point in case- we made her a huge bottle and she gulped it down- and rewarded me yesterday with her first giggle. 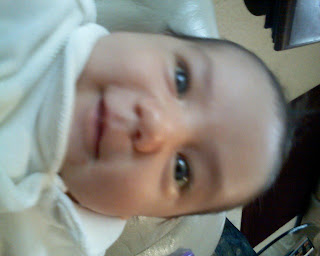 And who has time for a secret lover or second identity when your three month old lets out the loudest burp you have ever heard any being on Earth make, and coats you with an entire bottles worth of puke anyway?

I mean, who would trade that kind of living for the rush you get with five ounces of regurgatated formula squishing around between your boobs- a feeling that never entirely leaves you the rest of the day? 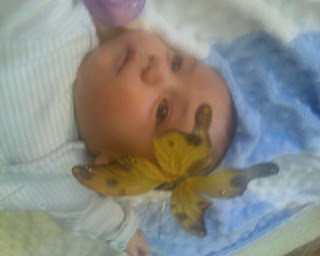 Certainly not I.
Posted by Kristi Bemus Charlotte's Mom at 10:20 AM